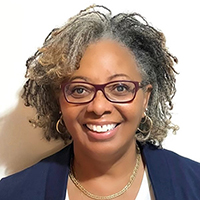 Felecia Bush is a supervisory budget analyst, managing the formulation, execution, and presentation of the $3B HIV/AIDS portfolio and the $62M OAR business functions for the budget office. Mrs. Bush first joined the NIH Office of AIDS Research (OAR) as a Budget Analyst in 1998, becoming the Lead Budget Analyst in 2020. Before joining OAR, Mrs. Bush was in the NIH Office of Budget (OB). She served as a Budget Analyst and a Clerk Typist for the National Center for Research Resources (NCRR), originally starting her government service in 1974. She received her Bachelor of Science degree in Business Administration from the University of Maryland in 1985.